1.1 The Story of Creative Commons

To understand how a set of copyright licenses could inspire a global movement, you need to know a bit about the origin of Creative Commons.

What were the legal and cultural reasons for the founding of Creative Commons? Why has CC grown into a global movement?

CC’s founders recognized the mismatch between what technology enables and what copyright restricts, and they provided an alternative approach for creators who want to share their work. Today that approach is used by millions of creators around the globe.

When did you first learn about Creative Commons? Think about how you would articulate what CC is to someone who has never heard of it. To fully understand the organization, it helps to start with a bit of history.

The story of Creative Commons begins with copyright. You’ll learn a lot more about copyright later in the course, but for now it’s enough to know that copyright is an area of law that regulates the way the products of human creativity are used – like books, academic research articles, music, and art. Copyright grants a set of exclusive rights to a creator, so that the creator has the ability to prevent others from copying and adapting her work for a limited time. In other words, copyright law strictly regulates who is allowed to copy and share with whom.

The internet has given us the opportunity to access, share, and collaborate on human creations (all governed by copyright) at an unprecedented scale. The sharing capabilities made possible by digital technology are in tension with the sharing restrictions embedded within copyright laws around the world.

Creative Commons was created to help address the tension between creator’s ability to share digital works globally and copyright regulation. The story begins with a particular piece of copyright legislation in the United States. It was called the Sonny Bono Copyright Term Extension Act (CTEA), and it was enacted in 1998. It extended the term of copyright for every work in the United States—even those already copyrighted—for an additional 20 years, so the copyright term equaled the life of the creator plus 70 years. (This move put the U.S. copyright term in line with some other countries, though many more countries remain at 50 years after the creator’s death to this day.)

Fun fact: the CTEA was commonly referred to as the Mickey Mouse Protection Act because the extension came just before the original Mickey Mouse cartoon, Steamboat Willie, would have fallen into the public domain. 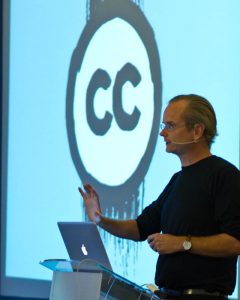 Stanford Law Professor, Lawrence Lessig, believed this new law was unconstitutional. The term of copyright had been continually extended over the years. The end of a copyright term is important—it marks the moment the work moves into the public domain for everyone to use for any purpose without permission. This is a critical part of the equation in the copyright system. All creativity and knowledge builds on what came before, and the end of a copyright term ensures that copyrighted works eventually join the pool of knowledge and creativity from which we can all draw to create new works.

The new law was also hard to align with the purpose of copyright as it is written into the U.S. Constitution—to create an incentive for authors to share their works by granting them a limited monopoly over them. How could the law possibly further incentivize the creation of works that already existed?

Lessig represented a web publisher, Eric Eldred, who had made a career of making works available as they passed into the public domain. Together, they challenged the constitutionality of the Act. The case, known as Eldred v. Ashcroft, went all the way to the U.S. Supreme Court. Eldred lost.

Inspired by the value of Eldred’s goal to make more creative works freely available on the internet, and responding to a growing community of bloggers who were creating, remixing and sharing content, Lessig and others came up with an idea. They created a nonprofit organization called Creative Commons and, in 2002, they published the Creative Commons licenses—a set of free, public licenses that would allow creators to keep their copyrights while sharing their works on more flexible terms than the default “all rights reserved.” Copyright is automatic, whether you want it or not. And while some people want to reserve all of their rights, many want to share their work with the public more freely. The idea behind CC licensing was to create an easy way for creators who wanted to share their works in ways that were consistent with copyright law.

From the start, Creative Commons licenses were intended to be used by creators all over the world. The CC founders were initially motivated by a piece of U.S. copyright legislation, but similarly restrictive copyright laws all over the world restricted how our shared culture and collective knowledge could be used, even while digital technologies and the internet have opened new ways for people to participate in culture and knowledge production.

Watch this short video, A Shared Culture, to get a sense for the vision behind Creative Commons.

Since Creative Commons was founded, much has changed in the way people share and how the internet operates. In many places around the world, the restrictions on using creative works have increased. Yet sharing and remix are the norm online. Think about your favorite video mashup or even the photos your friend posted on social media last week. Sometimes this type of sharing and remix happen in violation of copyright law, and sometimes they happen within social media networks that do not allow those works to be shared on other parts of the web.

In domains like textbook publishing, academic research, documentary film, and many more, restrictive copyright rules continue to inhibit creation, access, and remix. CC tools are helping to solve this problem. Today Creative Commons licenses are used by nearly 2 billion works online across 9 million websites. The grand experiment that started about 20 years ago has been a success, including in ways unimagined by CC’s founders.

In the next section, you’ll learn more about what Creative Commons looks like today—the licenses, the organization, and the movement.

Technology makes it possible for online content to be consumed by millions of people at once, and it can be copied, shared, and remixed with speed and ease. But copyright law places limits on our ability to take advantage of these possibilities. Creative Commons was founded to help us realize the full potential of the internet.