Combining and adapting CC-licensed works is where things can get a little tricky. This lesson will give you the tools you need. 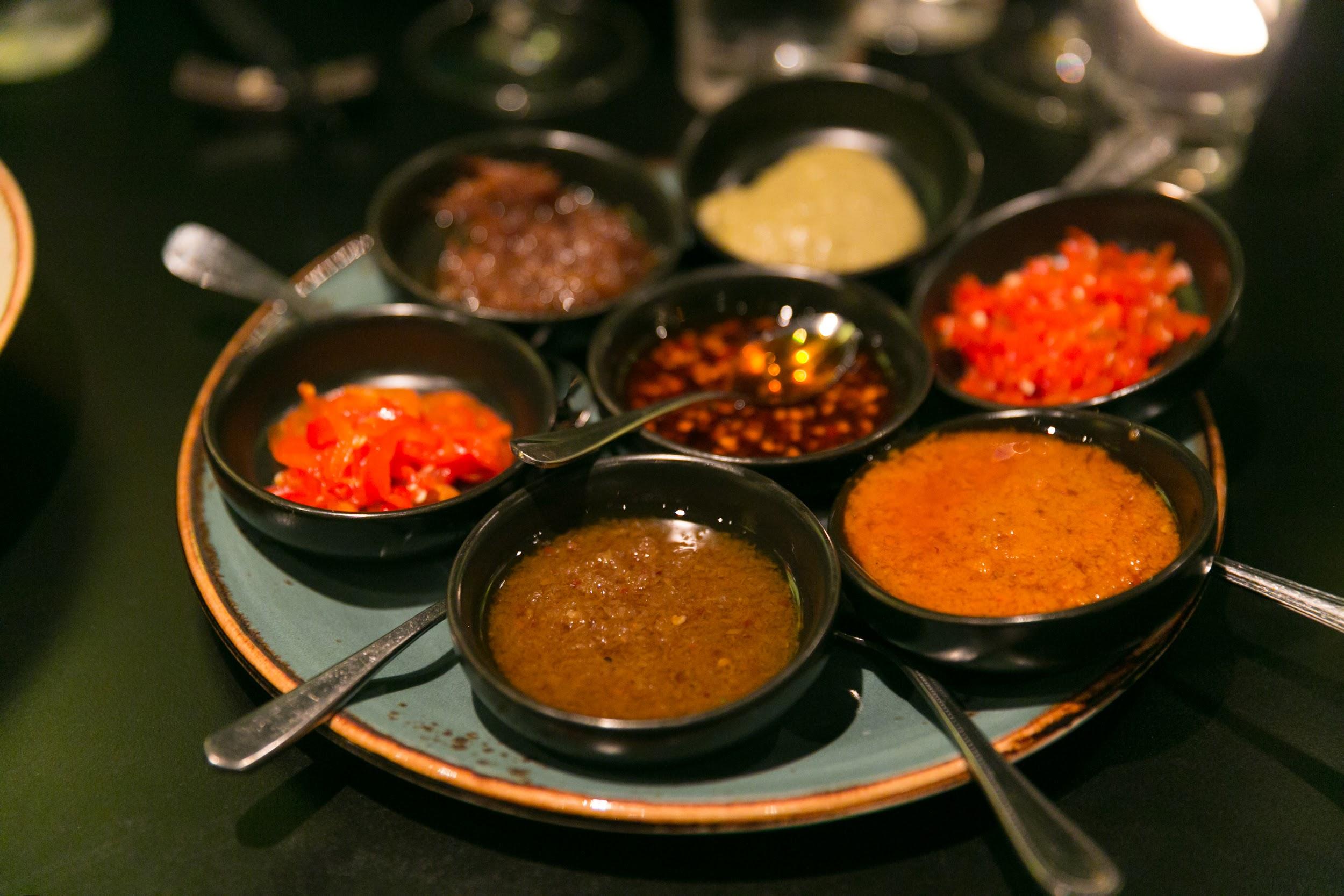 “Combination of chilies” by City Foodsters is licensed under CC BY 2.0

The great promise of Creative Commons licensing is that it increases the pool of content from which we can draw to create new works. To take advantage of this potential, you have to understand when and how you can incorporate and adapt CC licensed works. This requires careful attention to the particular CC licenses that apply, as well as a working understanding of the legal concept of adaptations as a matter of copyright.

Personal Reflection / Why it Matters To You

Copying a CC licensed work and sharing it is pretty simple. Just make sure to provide attribution and refrain from using it for commercial purposes if it is licensed with one of the NonCommercial licenses.

But what if you are changing a CC licensed work or incorporating it into a new work? First, remember that if your use of someone else’s CC licensed work falls under an exception or limitation to copyright (like fair use or fair dealing), then you have no obligations under the CC license. If that is not the case, you need to rely on the CC license for permission to adapt the work. The threshold question then becomes, is what you are doing creating an adaptation?

Adaptation (or derivative work, as it is called in some parts of the world) is a term of art in copyright law. [1] It means creating something new from a copyrighted work that is sufficiently original to itself be protected by copyright. This is not always easy to determine, though some bright lines do exist. Read this explanation on the CC site about what constitutes an adaptation. Some examples of adaptations include a film based on a novel or a translation of a book from one language into another.

Keep in mind that not all changes to a work result in the creation of an adaptation, such as spelling corrections. Also remember that to constitute an adaptation, the resulting work itself must be considered based on or derived from the original. This means that if you use a few lines from a poem to illustrate a poetry technique in an article you’re writing, your article is not an adaptation because your article is not derived from or based on the poem from which you took a few lines. However, if you rearranged the stanzas in the poem and added new lines, then almost always the resulting work would be considered an adaptation.

Here are some particular types of uses to consider (some of them should be familiar from earlier lessons!):

If your reuse of a CC licensed work does not create an adaptation, then…

If your reuse of a CC licensed work does create an adaptation, then there are limits on whether and how you may share the adapted work. We will look at those next. But first, a note about collections of materials.

Introductory note: In many situations, such as reuse of a photo in a slide presentation, it is obvious that no adaptation has been created. However, the determination can be more difficult when bringing together multiple works into one larger work. This distinction between adaptations and collections is one of the trickiest concepts in copyright law. It also varies by jurisdiction and, even within a given jurisdiction, a judge’s determination between the two can be subjective, since there are few definitive rules on which to rely.

In contrast to an adaptation or remix of others’ work, a collection involves the assembly of separate and independent creative works into a collective whole. A collection is not an adaptation. One community member likened the difference between adaptations and collections to smoothies and TV dinners, respectively. 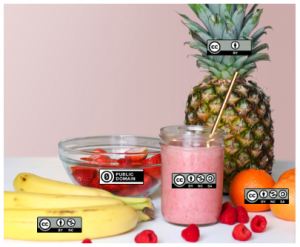 Attributions: “CC Smoothie” by Nate Angell. CC BY. Derivative of “Strawberry Smoothie On Glass Jar” by Element5 (https://www.pexels.com/photo/strawberry-smoothie-on-glass-jar-775032/) in the public domain, and various Creative Commons license buttons by Creative Commons (https://creativecommons.org/about/downloads) used under CC BY.

In a “smoothie” or adaptation / remix, you often cannot tell where one open work ends and another one begins. While this flexibility is useful for the new creator, it is still important to provide attribution to the individual parts that went into making the adaptation.

An example of an education adaptation would be an open textbook chapter that weaves together multiple open educational resources in such a way that the reader can’t tell which resource was used on which page. That said, the endnotes of the book chapter should still provide attribution to all of the sources that were remixed in the chapter.

2. Like a TV dinner, a collection compiles different works together while keeping them organized as distinct separate objects. An example of a collection would be a book that compiles openly-licensed essays from different sources. 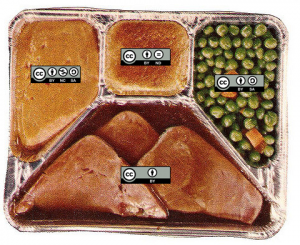 When you create a collection, you must provide attribution and licensing information about the individual works in your collection. This gives the public the information they need to understand who created what and which license terms apply to specific content. Revisit Section 4.1 on choosing a license to learn how to properly indicate the copyright status of third party works that you incorporate into your new work.

When you combine material into a collection, you may have a separate copyright of your own that you may license. However, your copyright only extends to the new contributions you made to the work. In a collection, that is the selection and arrangement of the various works in the collection, and not the individual works themselves. For example, you can select and arrange pre-existing poems published by others into an anthology, write an introduction, and design a cover for the collection, but your copyright and the only copyright you can license extends to your arrangement of the poems (not the poems themselves), and your original introduction and cover. The poems are not yours to license.

What happens when you create an adaptation of a CC licensed work or works?

→ If the underlying work is licensed under a NoDerivatives license, you can make and use changes privately but you cannot share your adaptation with others, as discussed above.

→ If the underlying work is licensed under a ShareAlike license, then ShareAlike applies to your adaptation and you must license it under the same or a compatible license. More on this below.

→ In all cases, you have to attribute the original work when you create an adaptation.

The more complicated scenario is when you are adapting two or more CC licensed works into a new work.

In both situations, you need to consider what options you have for licensing the copyright you have in your adaptation; this is called the Adapter’s License. Remember that your rights in your adaptation only apply to your own contributions. The original license continues to govern reuse of the elements from the original work that you used when creating your adaptation. This Adapters License Chart chart may be a helpful guide. When creating an adaptation of material under the license identified in the left hand column, you may license your contributions to the adaptation under one of the licenses indicated on the top row if the corresponding box is green. CC does not recommend using a license if the corresponding box is yellow, although doing so is technically permitted by the terms of the license. If you do, you should take additional care to mark the adaptation as involving multiple copyrights under different terms so that downstream users are aware of their obligations to comply with the licenses from all rights holders. Dark gray boxes indicate those licenses that you may not use as your adapter’s license.

How to pick your Adapter’s License:

When people talk about licenses being “compatible,” they can be referring to several different situations.

One type of license compatibility involves the question of what licenses you can use for your adapter’s license when you adapt a work. This is what we discussed above. For example, BY-NC is compatible with BY, in the sense that one can adapt a BY work and use BY-NC on her adaptation.

By definition, the ShareAlike licenses have very few compatible licenses. All SA licenses after version 1.0 allow you to use a later version of the same license on your adaptation. For example, if you remix a BY-SA 2.0 work, you can, and should, apply BY-SA 4.0 to your adaptation. There are also a small number of non-CC licenses that have been designated as CC Compatible Licenses for ShareAlike purposes. You can read more about that here.

Another type of license compatibility relates to what licenses are compatible when adapting (more commonly referred to as “remixing” in this context) more than one pre-existing work. The remix chart below may be a helpful guide in these circumstances. To use the chart, find a license that applies to one of the works on the left column and the license that applies to the other work on the top right row. If there is a check mark in the box where that row and column intersect, then the works under those two licenses can be remixed. If there is an “X” in the box, then the works may not be remixed unless an exception or limitation applies. 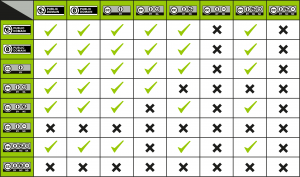 When using the chart, you can determine which license to use for your adaptation by choosing the more restrictive of the two licenses on the works you are combining. While that technically isn’t your only option for your adapter’s license, it is best practice because it eases reuse for downstream users.

It can be intimidating to approach remix in a way that is consistent with copyright. In this lesson, hopefully you gained some tools for how to approach the task. The threshold question is  whether an adaptation under copyright is created. Once that is answered, you have the information you need to determine what works from the commons you can incorporate into your work.