As a set of legal tools, a movement, and a nonprofit, Creative Commons has evolved in many ways over the course of its history.

Today CC licenses are prevalent across the web and are used by creators around the world for every type of content you can imagine. The open movement, which extends beyond just CC licenses, is a global force of people committed to the idea that the world is better when we share and work together. Creative Commons is the nonprofit organization that stewards the CC licenses and helps support the open movement.

When you think about Creative Commons, do you think about the licenses? Activists seeking copyright reform? A useful tool for sharing? Symbols in circles? Something else?

Are you involved with Creative Commons as a creator, a reuser, and/or an advocate? Would you like to be?

Today, the CC licenses and public domain tools are used on more than 1.4 billion works, from songs to Youtube videos to scientific research. The licenses have helped a global movement come together around openness, collaboration, and shared human creativity. CC the nonprofit organization, once housed within the basement of Stanford Law School, now has a staff working around the world on a host of different projects in various domains.

We’ll take these aspects of Creative Commons—the licenses, the movement, and the organization—and look at each in turn.

CC legal tools are an alternative for creators who choose to share their works with the public under more permissive terms than the default “all rights reserved” approach under copyright. The legal tools are integrated into user-generated content platforms like YouTube, Flickr, and Jamendo, and they are used by nonprofit open projects like Wikipedia and OpenStax. They are used by formal institutions like the Metropolitan Museum of Art and Europeana, and individual creators.For a creative take on Creative Commons and copyright, listen to this song by Jonathan “Song-A-Day” Mann about his choice to use CC licenses for his music.

For a creative take on Creative Commons and copyright, listen to this song by Jonathan “Song-A-Day” Mann about his choice to use CC licenses for his music.

Won’t Lock it Down. Jonathan “Song-A-Day” Mann. CC BY.

In addition to giving creators more choices for how to share their work, CC legal tools serve important policy goals in fields like scholarly publishing and education. Watch the brief video, Why Open Education Matters, to get a sense for the opportunities Creative Commons licenses create for education.

Collectively, the legal tools help create a global commons of diverse types of content—from picture storybooks to comics —that is freely available for anyone to use.

CC licenses also serve a non-copyright function. They signal a set of values and a different way of operating.

For some users, this means harkening back to the economic model of the commons. As economist David Bollier describes it, “a commons arises whenever a given community decides it wishes to manage a resource in a collective manner, with special regard for equitable access, use and sustainability.” Wikipedia is a good example of a commons-based community around CC-licensed content.

For others, the CC legal tools and their buttons express an affinity for a set of core values. CC buttons have become ubiquitous symbols for sharing, openness, and human collaboration. The CC logo and icons are now part of the permanent design collection at The Museum of Modern Art (MoMA) in New York City.

While there is no single motivation for using CC licenses, there is a basic sense that CC licensing is rooted in a fundamental belief that knowledge and creativity are building blocks of our culture rather than simple commodities from which to extract market value. The licenses reflect a belief that everyone has something to contribute, and that no one can own our shared culture. Fundamentally, they reflect a belief in the promise of sharing.

Over the years, a global coalition of people has formed around Creative Commons and open licensing. [1] This includes activists working on copyright reform around the globe, policymakers advancing policies mandating open access to research and data, and creators who share a core set of values. Most of the people and institutions who are part of the CC movement are not formally connected to Creative Commons.

The CC Global Network  [2] is just one player in the larger open movement, which includes Wikipedians, Mozillians, open access advocates, and many more.

Open source software is cited as the first domain where networked open sharing produced a tangible benefit as a movement that went much further than technology. The Conversation’s Explainer overview of other movements adds other examples, such as Open Innovation in the corporate world, Open Data (see the Open Data Commons) and Crowdsourcing. There is also the Open Access movement, which aims to make research widely available, the Open Science movement, and the growing movement around Open Educational Resources.

A small nonprofit organization stewards the Creative Commons legal tools and helps power the open movement. CC is a distributed organization, with CC staff and contractors working from various locations around the world. 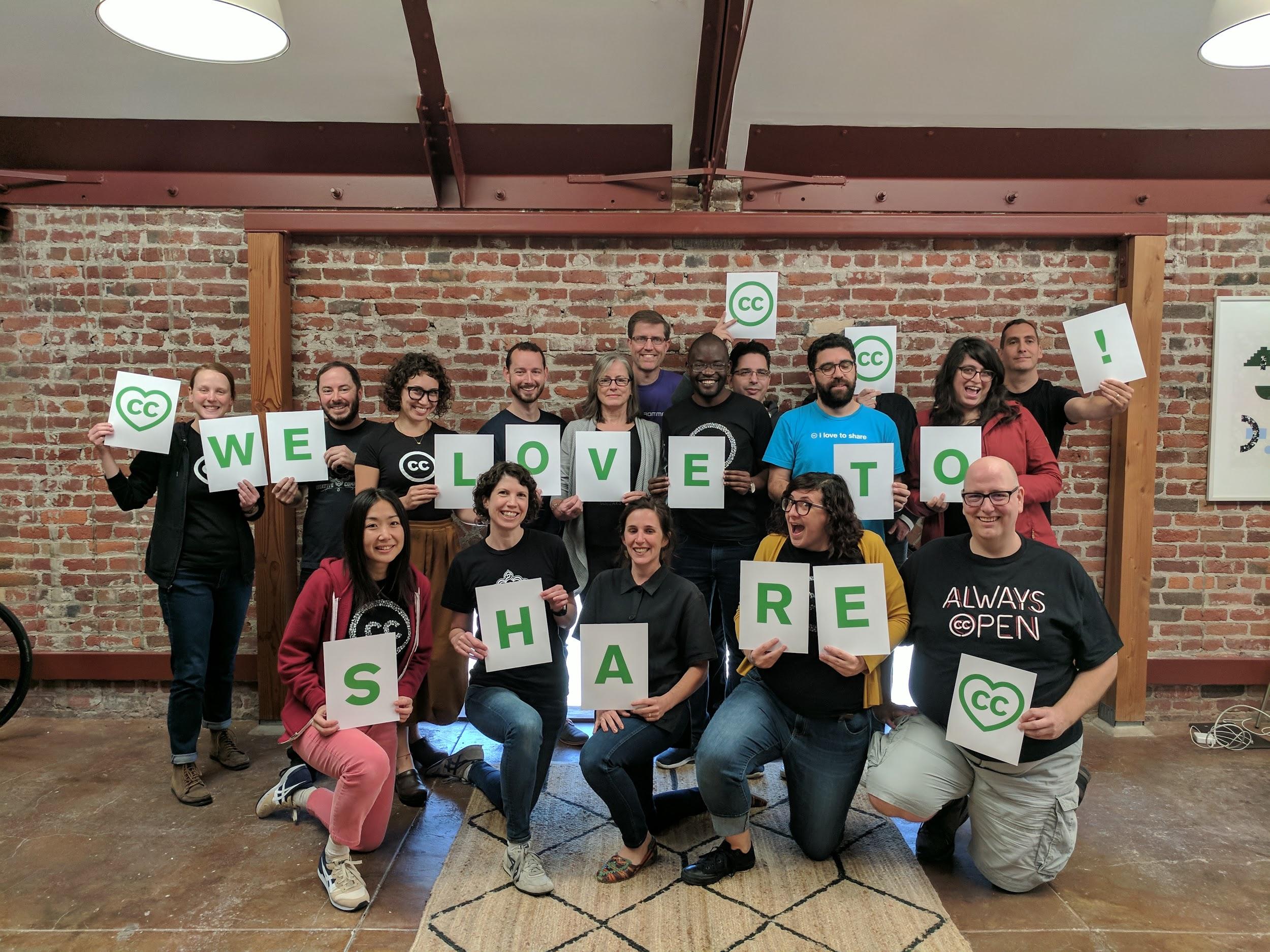 In 2016, Creative Commons embarked on a new organizational strategy based on building and sustaining a vibrant, usable commons, powered by collaboration and gratitude. This is a shift to focusing not only on the number of works out there under CC licenses and available for reuse, but on the connections and collaborations that happen around that content.  This video introduces the new strategy (optional).

Licenses, Tools and Technology
The CC licenses and public domain tools are the core legal tools designed and stewarded by CC. While our licenses have been rigorously vetted by legal experts around the globe, our work is not done. We are actively working on technical infrastructure designed to make it easier to find and use content in the digital commons. We are also thinking about ways to better adapt all of CC’s legal and technical tools for today’s web.

Supporting the movement
CC works to help people within open movements collaborate on projects and work toward similar goals. Through CC’s multiple programs, we work directly with our global community—across education, culture, science, copyright reform, government policy, and other sectors—to help train and empower open advocates around the world.

Creative Commons has grown from a law school basement into a global organization with a wide reach and a powerful name associated with a core set of shared values. It is, at the same time, a set of licenses, a movement, and a nonprofit organization. We hope this unit helped give you a sense for what the organization does and, even more importantly, how you can join us in our work.